Alcassa is the capital city of the nation of Ketland (Kettian: Cetija), one of 11 semi-autonomous nations which make up ‘The Union’. Ketland itself is made up of a unity of the three ancient kingdoms of Averia, Emporda, and Patria. Alcassa is home to around 1 million people and was founded in ancient times, quickly growing to be a powerful city. It is built in a strategic position on a busy trading route, which has made Alcassa a wealthy and influential city throughout its history. Much of the city is built on flat land to the east, south and south-west of the Léon River – the ground to the north is dominated by steep hilly terrain.

The city’s official language is Kettian, which developed from Spanish. Some Kettian vocabulary has been influenced by the Slavic languages as well as English due to successive invasions throughout its history. The name ‘Alcassa’ comes from ‘al Cassá’, meaning ‘home’ in the native Kettian language.

The maze of streets around the Old City (Kettian: al Çentrum) date back to the medieval
times and form the oldest part of the city. It is characterized by narrow streets, squares and historic monuments. The impressive Royal Castle towers above the Old City on the north bank of the river, and can be seen all over Alcassa. The main part of the Old City is linked to Jeída on the western river bank by the Mosta Vélca ‘Great Bridge’. Jeída was the main gateway to the city from the west, and also dates back to medieval times.

The New City (Kettian: Orás Nova), built next to the Old City, dates back to the Renaissance period. This part of the city is organised much more formally into a grid pattern with grand tree-lined boulevards and open squares. Important constitutional buildings are located here, such as the Kettian Parliament building (the Palaço Bjanco) and the University of Alcassa. In the 1800s, the inner-city neighbourhoods of Čueca, Jeída Nova, Escala and Capros grew up as busy, colourful residential areas. 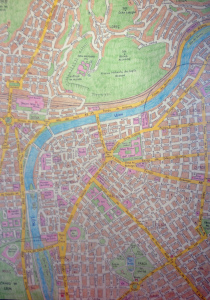 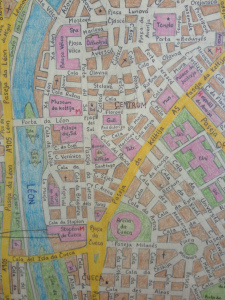 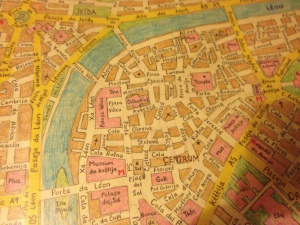 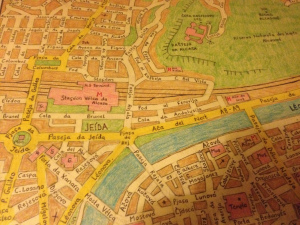