As-Perdenoy is located in the Republic of Cearno. With a population of 69,399, it is the largest city of Arteron province. However, due to historical reasons and its decentral location, it is not the provincial capital. North of the city, located on a hill next to the suburb Desceria is an important castle from where the whole area was reigned during the High Middle Ages. Inside the city, there’s nothing like a residential castle, as the city could free itself during the Late Middle Ages from the territorial dependency, becoming one of the strongest free imperial cities. The cartographic style is based upon official German “TK50” maps (topographical maps in 1:50,000 scale), but – as can be seen when looking at it very closely – some elements are taken from the French “IGN” maps (Institut Géographique National). 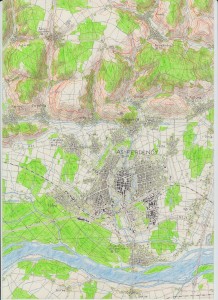