For the city of Kaalst, the network map was set up first and the city map was created from the network map. The city has 7 S‑train lines, 5 Metro lines and 8 tramway lines running exclusively within the city boundaries. It has the usual German‑styled, bundled cross city S‑train network (see for example Stuttgart) with branches sprawling out as it leaves the city center. The Metro network also has a bundled section within the city center which runs parallel to the S‑train but along the coast and forms a circle with M5 acting as a circle but also loop line, as e.g. Oslo runs its circle line. The city center has an area of 35.46km², the population is 146,371 and the population density is 4,128p/km². 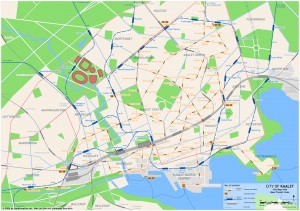 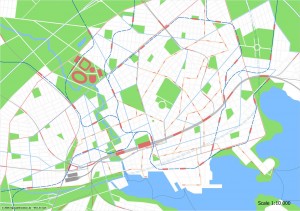 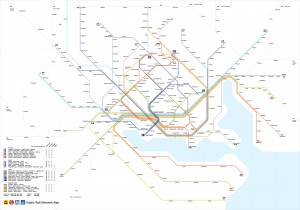