The province of Fynnshire is located in the west of the Kingdom of the Mauzlands, a small country in western Europe. There are two neighbouring countries: the Fereral Republic of Franconia in the north and Gelbia in the east. The Mauzlands are German speaking, except Fynnshire, an English speaking autonomous territory. This province, originally independent, is a part of the venerable Kingdom of Maritime Explorers since 1754. The Mauzlands were a Republic and declared independency from the Franconian Empire in 1649. Since 1804 it is a constitunional Monarchy, where the monarch has a limited voice. The current throne owner is Felix III. from the House of Ansbach-Bayreuth-Mauzburg that provides the Kings and Queens since 1847. 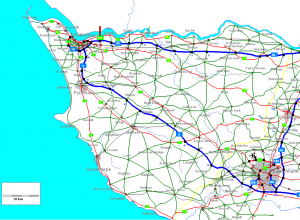 Gelderland is located in the south-east of Fynnshire and a more rural area. Lotternheim, a city with a population of 1.5 million, is the administrative centre of the region. It is an important railway hub and industrial city, e.g. the Ford production plant of Mauzlande, an important refinery of Mauzöl AG and several feeder plants are located here. Also, there is a large coal power plant of EnML, with the combustibles coming from a nearby surface mining in the north. With its function as a railway hub, Lotternheim also has a huge marshalling yard and a container terminal, as the main railroads from Mauzburg, Wallington, Kiefernstadt and further from Oldenbusch in the Federal Republic of Franconia meet here. 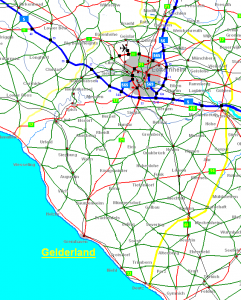