Vænesston is named after a mistress of the first explorer. Vænessa’s
surname is lost in history though. Captain Dževogurski was the first
explorer to sail up the Quidth river. Usually, the ship would dock on along
the bank, and the crew would go on land to find fresh supplies. This time,
there is thick marsh and wetland stretching for tens of nautical miles
without a break. In the late afternoon of Vænessa’s birthday, the ship
arrives at a confluence of two rivers. The ship is running very low on
supplies, and the worried Captain dispatches a tender to explore the
joining river. After about an hour, the tender races towards the
mother-ship shouting “Land ahoy!”. 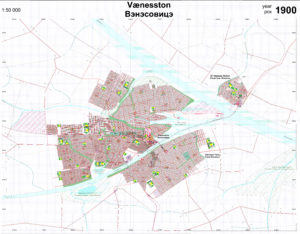 A small settlement is setup in the year 1745, 3/4 nautical miles from the
confluence on the northern bank. It hosts 30 military men, 20 civilian men,
11 spouses and 26 children. It acts as a resupply station for other ships.
Shortly after the death of Vænessa, beacon in the shape of a statue is
erected at the point of confluence. Shipping traffic increases
dramatically. Farming begins in the natural jungle clearing; wild cocoa and
coffee plants are discovered and these crops are cultivated. As more and
more people travel up and down the river, Vænesston becomes an important
trading town. Industry, and commerce is drawn to the town, and in 1885, it
is declared the provincial capital.

This map was drawn in a vector-graphics program called “TurboCAD”. It was
not feasible to print and scan this map, so I took 210 screen shots. 10
hours later, I had all of them stitched together. However, the file become
a monster measuring 13,000 x 10,000 pixels, and Microsoft Word is not able
to open it for editing. This prevented me from being able to clean this map
up. This map has an unintentional mistake: After I done this print, I
discovered that one property (the small black polygons) is completely
land-locked. That property has no access to a road or street. Let me know
if you can find it!