Yasheu is the capital of the Republic of Roantra. 60% of the country are located on the continental mainland, 40% on an island. The city of Yasheu is located in the center of the country at the point where mainland and island are closest to each other – the natural position for a country’s main metropolis. The city itself has a population of almost 720,000, while the metropolitan area as a whole is inhabited by 1.7 million people. The city has one underground line that runs from the west coast via the central station to Shelagir and then continues overground to Decrafoel. A second underground line has been under construction since 15 years, but work on this line is suspended at the moment due to financial problems. Additionally, there is a tramway network operated with vehicles from the 1970’s – except for two lines that have been modernised recently. The railway line from Nuroxo to Pelxotan is an overloaded bottleneck, as all the north-south railway traffic has to pass through it. Concerning the graphical depiction of the hand-drawn maps, the combination with a 3-dimensional ground model is remarkable, giving an excellent impression of the topographical circumstances in the metropolitan area. 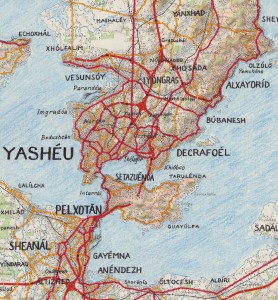 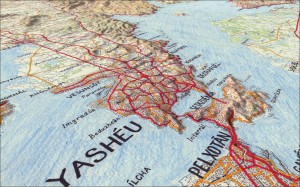 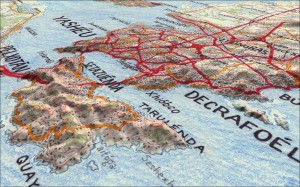