All of my cities are fictional, but I prefer to set them within real countries so that I have an idea of what the urban development, and street layouts should look like. Anchester is a mid-sized city located in southern Ontario, Canada. The city itself has a population of 370 000, while the metropolitan area is closer to 500 000. The Ranshawe river flows through Anchester, and mills located near the river as the city was settled in the early 1800’s. The city grew very little until several railways were built, and it developed into an important manufacturing center in the late 1800’s. A provincial highway crosses the city’s north end, while a local expressway crosses the city from north to south where it ends up in the adjacent community of Larue. The older, central neighborhoods of the city are laid out in a grid pattern while its newer areas feature curvy roads and crescents. Anchester has tried to slow urban sprawl and promote density through the construction of a light rail transit system. It consists of 3 lines connecting suburban shopping malls with the city’s downtown. Anchester is home to a well-respected university, a number of factories, a brewery, beautiful riverfront trails and parks, a busy regional airport, and a small intercity train station. 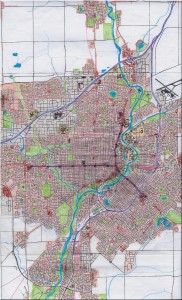