An urban geofiction project by Alain May (Berlin, Germany).

Karenz is another project by the author of Jagemünd. It shows a metropolitan region with two twin cities: Karenz, the main city, with its motorway ring and a smaller city in the south. Each city is traversed by a river and both were founded on small river islands. In Karenz, the newer parts of the city center are located north of the river, whereas in its neighbour city the development shifted to the south. A dense public transit system connects the two cities: there is a north‑south metro line as well as a dense tramway network and an S‑train network including a circle line. The harbor of Karenz is located in the west of the city where the two rivers unite. Karenz was the first city on this site that was entirely drawn on a computer. 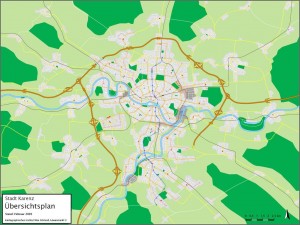 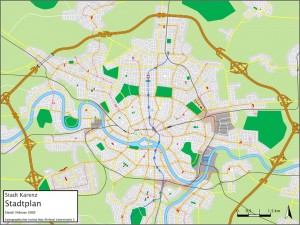