A first hand-drawn sketch of the Republic of Kalm (original scale 1:1,000,000). Tarott, the capital, in the west at the Tarott Bay at the West Sea – by far the biggest city in the country. Other big cities are Herlenz in the south, located in the Juhne River Valley, Pern in the north-east, at the Ahre River, Orlent and Vennburg in the Kelm Valley mining region (Orlent next to the big Kohn Lake) in the middle east of the country and Nerschach, between Tarott and Pern in the Middle Fora Valley. In the north, the Vinn Sea is the natural border of Kalm, the eastern border runs along the Egiten high mountain range, the southern border runs parallel to the Juhne River Plain, the West Sea is the western resp. south-western border. Important secondary mountain ranges are Fennplatt north of the Kelm Valley and Solm between Tarott in the west and the Upper Fora Valley in the middle of the country, where Forberg and Wittersberg are located. The 150km long and 40km wide Kohn Lake in the middle east is the biggest lake in the country, the Krabis lake district lies in the center of a triangle between Nerschach, Pern and the Vinn Sea. The longest north-south extent of the Republic of Kalm is about 1080km, the longest east-west extent approx. 920km. 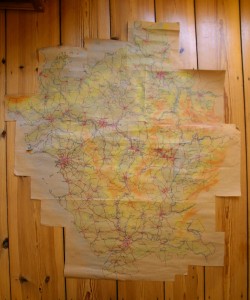 Hand-drawn map (sketch) of the Republic of Kalm