A short introduction to TKKG: it is a junior detective series of audio dramas, very famous in German-speaking countries. The four main characters Tim, Karl, Klößchen and Gaby (and her Cocker Spaniel Oskar) solve all sorts of crimes since the series started in 1979. They live and act in a fictitious town with millions of inhabitants, located somewhere in Germany.

“As soon as I started collecting TKKG, I began drawing the TKKG city Millionenstadt (town of millions). Materials: 16 pages of a mathematics exercise book, a pencil, and – of course – lots of TKKG volumes. Maybe the drawing doesn’t match with the TKKG city that other people have in mind, as I started it while knowing only about 15 volumes. But anyway: Have fun with the drawing!”

Below you’ll find the map of the city in an isometric depiction, as well as the same map with labels showing localities mentioned in the series an suburban rail lines (green) and metro lines (blue). 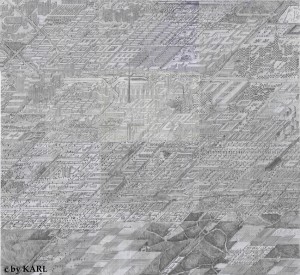 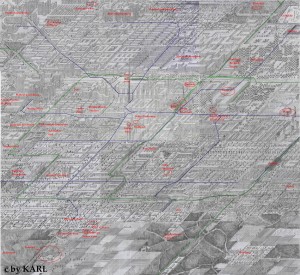