All of my cities are fictional, but I prefer to set them within real countries so that I have an idea of what the urban development, and street layouts should look like. Tiner is a large city located in southwest England with a metropolitan population of around 1 000 000. The city sits near the end of the River Marr, and is home to an important port. Although established during the middle-ages the city grew very little until the industrial revolution when it became an important center with many railways and factories. Tiner’s many dense row house neighborhoods were built during this time, along with its notorious slums. Starting in the mid 1960’s most of these slums were torn down and replaced with modernist apartment blocks. Around this time the region also began building an expressway system consisting of a ring road and several other motorways connecting the central city with a ring of suburbs. Despite its large population it currently does not posses a light rail transit system. The region struggles with urban sprawl, and low-density, car-dependent neighbourhoods have swallowed up much of the surrounding farmland. Tiner is home to a well-respected university, beautiful parks, and a sizable international airport and train station. 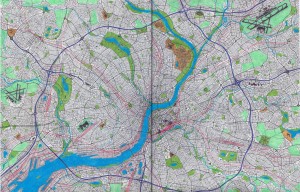