Levengrand is a city with a population of approx. 6.29 million on an area of 1,135 sqkm. The city is located at the mouth of several rivers into the sea in the south. The city has a predominantly orthogonal center – and a mixed structure of either orthogonal or winding roads in the other districts. Due to the enormous size of the city and the still existing redensification potencials, suburbanisation could be kept at a minimum until today. There are no continous green axes in the city, but many parks and green spots and also the hinterland offers a great variety of local recreation. In the south, at the estuary, the harbour and the airport are located next to each other. The underground network consists of 15 lines with a total length of 578 km, 375 stations and an average station distance of 1347 m. Many suburban rail, elevated (H-Bahn), light rail and bus lines complete the public transit network. Along with the pictures below, take a look at the high-resolution city map and the Levengrand project page. 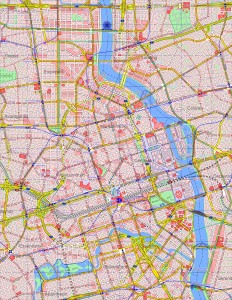 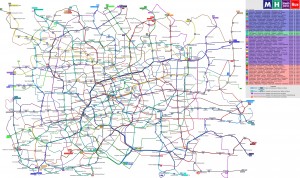 Metro network map (inside trains above the doors)