Here is an (uncomplete) hand-drawn map of Tilia, the capital city of a country that is looking for a name. The name Tilia comes from the name of the lime tree which is the symbole of liberty, love and loyalty. There is also a very huge lime tree in the middle of the main square in the old city.

Tilia is a sustainable city of some hundreds of thousands inhabitants on the east coast of a huge lake, where a big river gets into the lake.

We can see three kinds of urban morphology:

1) The old city is situated on a hill mostly surrounded by the lake. It is composed of very old medieval houses of 3 to 5 floors. Their walls are orange-ocher to yellow-ocher with colorful shutters. The old city is completely reserved to pedestrians. It is surrounded by battlements. Two metro lines (4a and 7)  and a trolleybus connect it to the rest of the city.
There is a big square with a huge lime tree which is the symbol of the city.

2) The ditricts from the 19th and early 20th centuries are separeted from the old part of the city by a canal and the port and from the newer districts by the river. The big city houses are also painted in orange and yellow-ocher tones. The streets are more straight and most of them are reserved to pedestrians or electric cars. It includes the castle of Tilia in a parc and the central train station.

3) The newer districts compose the rest and main part of the city. They include some old villages that have been integrated to the city and a lot of new buildings of 4 to 7 floors. Those districts are split into pieces or separated by long stripes of parcs and forests, that are useful to cool down the climate, and to absorb CO2 from source. Also, such “green axes” in the city have a very positive effect on biodiversity within the urban green areas and allow for an interconnected network of urban natural spaces. Thanks to them you can go to your job or shopping by car or on foot, without walking on a pavement or breathe the pollution which is uncommon thanks to the anti-car policy. The 11 tramway lines also use these parcs to go through the city. The newer districts also include some eco-dictricts, or districts without cars, sports infrastructures and universities. Some of the old roads and carparks became parcs with paths, bycicle paths and shops in the middle of them.

There are two business districts: one is composed of big buildings along a street next to the new great train station, and the second is composed of other big buildings scattered in a parc in a meander of the river. There are almost no individual houses but a lot of family gardens are available in most of the districts. The suburbs has the same urban morphology and architecture as the central new districts to favor social mixity. Some buildings are completely invented from other people ideas like an open gallery (a big art gallery where everybody comes and goes or free to expose or watch other people arts), or like big markets where people can sell what they grew in their family gardens or rooftop farms.
Finaly, farm buildings are getting built to grow local food. 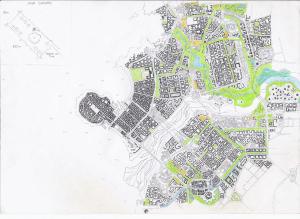 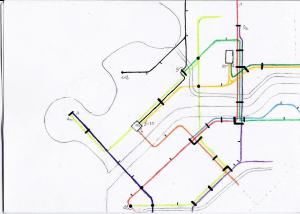 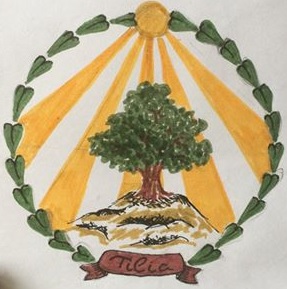 The Coat of arms was drawn by Anna Rakhilkina (from Almaty, Kazakhstan).