I was young when I made these cities in the late 1960’s and early 1970’s, and they are mostly drawn on notebook paper that I taped together as they grew. The cities are most often variations of New York City themes: the island that has to be commuted to, the barriers of water, the subway system, congestion, the ring road around the island, the old section with the later superimposed grid layout, highways that were rammed through neighborhoods, etc. I had no particular interest in the people or the culture, and as far as I was concerned they lived and breathed a life of just getting from one place to another. There were pretty cities and there were ugly industrial cities, and many monotonous ones. But for the most part they looked like the world that I knew best, New York City.

Below are three examples of three different “drawing phases”: an early map, a mass transit focused map and a highway focused map. See more great examples at the author’s homepage. 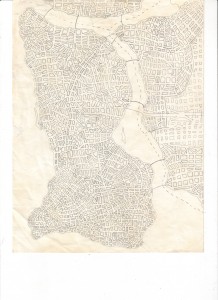 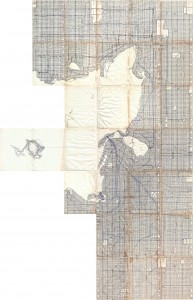 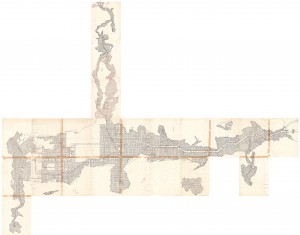