Bremen and Hardcastle are twin-cities located in southern Ontario, Canada. They have a combined population of approximately 500,000. Bremen is the larger city (population 330 000), and takes up the western half of the map. It was founded primarily by German immigrants, and is named after the German port city. Hardcastle, the smaller city (population 170,000), was founded by English settlers and takes up the eastern portion of the map. Prominent features of both communities include the Arden River and its tributaries, and highway 104 – a major provincial expressway that runs across the south end of both cities. Bremen is an important manufacturing centre that is home to several factories, some of which have closed in recent years. Hardcastle is a growing high-tech and scientific research hub. Much of this activity is focused around Sir John A.
Macdonald University, a large internationally renowned institution located within the city. The twin cities are joined by a recently-built light rail transit system that connects the downtowns of the two cities with the university, along with a shopping mall and community college in Bremen. Bremen-Hardcastle is served by an important regional airport with flights to several destinations across Canada and the U.S., along with a small train station. Both cities are continuing to experience population growth which, despite the best efforts of planners, continues to occur in the form of low-density urban sprawl. 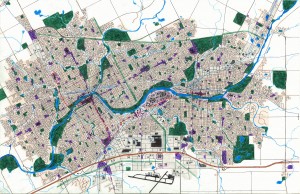