Privathul is a port city in the Republic of Fundlen, and is capital of the nation of Ullevi (Fundlen consists of 3 separate nations under one Republic). It has a population of 1.1m (2.2m in the metro area), and is the third largest city in Fundlen. It is 25km north of the Bottnane Pass, a route into the rest of Fundlen and the industrial Son valley. 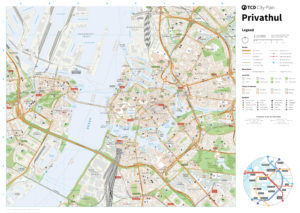 Between 1450 and 1700 the Privat docks were excavated, draining marsh to the south of the city. Neuhaben, was begun in 1860 and completed 6 years later. The Neucanal, linking the two dock complexes, was completed in 1871, following the path of the old city walls.

Privathul was in ruins by the end of the War of 1939-45. The city was rebuilt and modernised, prioritising road transport, social housing in tower blocks and Degerport, a new docks complex to the north of the city. The Modernist government plaza in Arsejnalka is the centrepiece of this period.

Privathul is home to a large financial sector, and is the headquarters for a number of shipping related companies. Since 2000 a number of creative companies have moved to Privathul to maximise links to MediaUllevi in Neuhabenstad, and the growing arts scene. The port is a major part of the local economy. Shipbuilding yards along the Deger have mostly been closed in the past 30 years.

The north of the city contains some of the most deprived areas in Fundlen, whilst the south and east of the city is mostly prosperous. The north has been affected by the decline of heavy industries and underinvestment by the local government, as well as high levels of racial segregation.

Stadrelbe (suburban) trains run through the city, with a hub at Flantaplejn. It is run along existing rail routes, with the central link from near Acentaplejn to Lorastras completed in 2004, replacing the old Flantaplejn terminus which was run down. Metro services run along 3 lines through two central tunnels, opened between 1983-1998. Metro coverage in the north of the city is poor. The integrated bus station and shopping centre in Sintpaule is an example of the extensive bus infrastructure built post-war to replace trams that had been destroyed. Tunnels take buses from nearby nodal entry points underground to a large bus terminus.

The Stadautoweg system (urban motorways) is centred on the Kyrelunhult, a suspension bridge completed in 1966. The network is frequently congested, and the bridge carries twice the planned level of traffic annually. A city plan to bury many of these motorways has been approved but implementation will take at least two decades. A congestion charging zone was introduced in 2011.