The population of Konthuan is 3.8 million within the city and 6.9 million within the metropolitan area. The city was founded at the shore of the Inner Konthuan Bay, forming a natural harbor. The urbanization spread out in the valleys of Kewluthan (Big River) in the north‑east and Kewlminghok (Minghok River) in the north‑west as well as along the shores of the Inner Bay. The city’s structure reminds of South‑American agglomerations with some elements of Middle‑African cities. Konthuan has a local and an express metro network (3 lines each), a dense tramway network as well as suburban rails and busses. The original scale of the hand‑drawn map is 1:200,000. It was drawn in summer 2005. 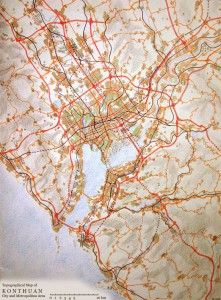 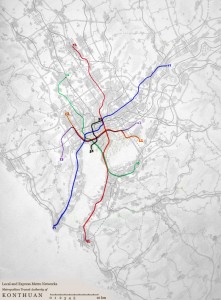