Tescent, an urban center located in a country similar to the US or Canada, has a metro area of 5 million people. Aspects of its downtown street patterning are inspired by the vieux quartier and downtown of Montreal. The “Emerald Shore” (lower right) portion of the map is more influenced by West Coast urbanism. Tescent was drawn in 1997. In whatever alternative universe it inhabits, it’s possible for a city to have both a Washington Harbor and a Victoria Station (and also, a southward-facing cathedral). 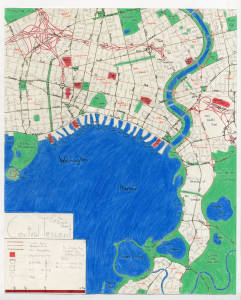 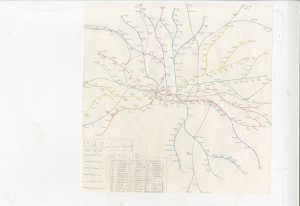