I started drawing fictional maps of countries and cities when I was about 10 years old, mainly of a country that I youthfully called ‘Dogland’, which was to be where my childhood stuffed toys were going to live. I still have most of these maps, but they’re not great. Earlier this year (2013), on a quiet Saturday afternoon, I thought I would restart my country, and in the absence of any other inspiration, called it Dogland again. Most of the cities are named after breeds of dog, and I decided to start from scratch.

Pinscher is a city of 178,000 people about 30km from the national capital (and largest city) Dogtown. It’s situated downstream of the confluence of the Rivers Pinsch and Dog. It is also the state capital of the Pinsch state, and has a long history. It is now a prosperous city that hosts a large car factory, a Division A football team and a number of technology companies, many spun out from the university. It is also a major commuter source for Dogtown, and has excellent rail connections. The city centre is medieval, with a 19th Century new town area near the station. Flagway Park north of the city along the River is the former location of a major car factory, moved in the 1980s to Cherry Hill/Pinscher Basin near the N46 bypass.

The city has a small tram network, inaugurated in 1991 and expanding. The city tunnel was opened in 1978 to connect with the West Way/Basin Viaduct route which handles a huge amount of traffic into the city, and is often congested.

Dogland is a federal island nation of around 23 million people, with an area of about 55,000km^2, and stretches 270km x 400km at its maximum extent. Notionally I think of it as sitting roughly in the Bay of Biscay, off France, with ferries from the east coast to Europe. It is mountainous in the west near the Atlantic, with a similar coastline to the west of Scotland. The south is flat, fertile farmland as is much of the east, with small ranges of hills dividing the country up. As a trading nation, many of its major cities are close to the sea, and a modern high speed rail network connects the main centres. 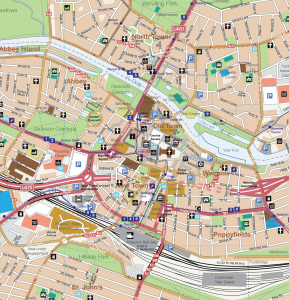 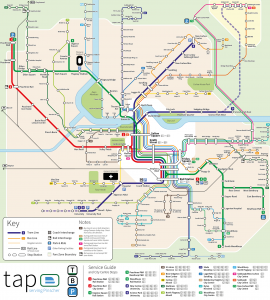 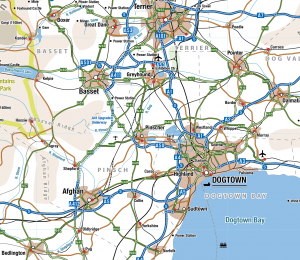 regional map of Pinscher and surroundings 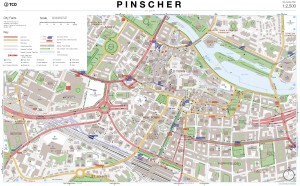