Los Angeles is a city created by the (currently) youngest fictional map maker presented on Urban Geofiction – Lucas is 16 years of age. Los Angeles is the capital city of the fictional Republic of the Holy Trinity. The estimated population of the greater metropolitan area of Los Angeles (Gran Angeles) is 15 million. The city has a well-structured motorway network, including a ring motorway surrounding the central part of the city. Several national and suburban railway lines operate from different terminus stations at both sides of the river that crosses the city centre and leads to the ocean with a huge harbour next to the central part of the city. The network of “Subterráneos” (metros) consists of five lines. 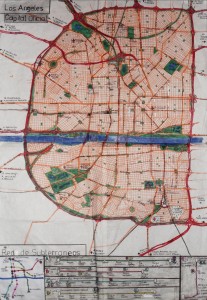 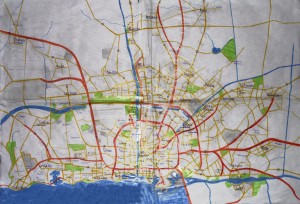