Orlent is the fourth largest city of the Republic of Kalm, located in the east of the country at the western shore of Kohnsee (Kohn Lake), at the point where Kelm river flows into the lake. It has a population of approx. 1 million and is an important administrative and cultural center. The old town on a hill overlooking the river and the lake, the huge Löschbergpark on a small mountain and the cultural districts south of the old town are especially worth visiting.

Orlent is the eastern end of the country’s most important high-speed railway line, connecting this metropolitan area to the industrial centers of Kelm region, Golbrünn, Forberg, Nerschach and Tarott, the capital. Within the city, there are a light-rail network (blue lines on the map) and a tramway network (purple lines), as well as a suburban rail network.

As I’m busy drawing Tarott, I didn’t have time to go more to the details here than 1:100,000 scale. So it’s just an overview map. A version with labels will be added later. By the way: the smaller city in the north-west of Orlent is called Bad Konnberg. It has a nice old town with a famous university and a cathedral. 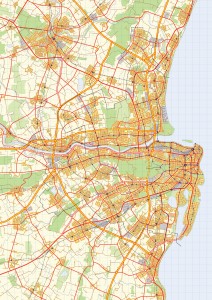