While getting used to drawing maps with vector-graphics software in 2006, I started drawing Trignon, a city with a population of about 230,000 (550,000 in the metropolitan area) in a French-speaking country. Trignon, a city with a well preserved medieval core, is located at the confluence of Vouard into Dondre river. The second largest town in the metropolitan area is Claincy, a north-western neighbour city of Trignon. The city has 3 modern tramway lines. The first of which opened in 2004, after 45 years of Trignon being a “city without rails in the streets”.

Trignon is inspired by many of the French cities I visited while I lived in France in 2004/2005. Unfortunatly, it’s only a fragment. But now that I “rediscovered” this work, I really want to finish it a.s.a.p.! 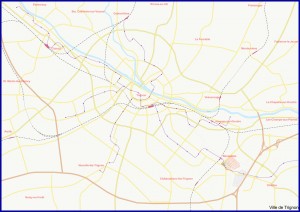 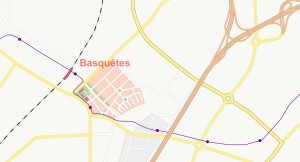