Reval (pop. 12,376) is the 19th-largest city in the province of Kanamonta.
It lies in the extreme southeast of the province, almost on the border with
Nachuse. Reval was founded in 1895 by a mixed contingent Baltic German
immigrants, and the city’s rural surroundings quickly attracted a large
group of Baltic peasants from the countryside. Today, the city is host to
the National Baltic Museum, showcasing the historical and cultural
contributions of the Baltic communities to Reval, Kanamonta, and the nation
as a whole. Reval has experienced steady growth for its entire history, and
its local economy is heavily affected by its two affiliate university
campuses.

This is my first digital city map, although I have created a few maps of
other provinces in the past. It was drawn in Inkscape and heavily inspired
by my collection of local, free tourist brochures and maps. 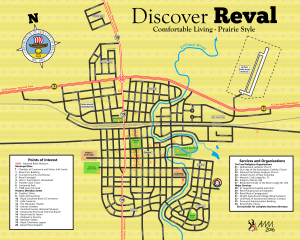