Set in the Valmont River Valley, Urbana has been a transportation hub from its birth. Settled in 1793 by James Clernon and his wife, Elizabeth, the village of Clernon quickly grew to the size of a city by 1820. The mayor of that time renamed the city to “Urbana” in honor of the continuous growth and prosperity that the river provided due to trade. However, the port (in 1863) was moved to the east to make way for the new Valmont & Southern Railroad that came to change the city’s way of life forever. By adding the new railroad, the government of the United States of Yavaria had led to a population boom of over 500,000 people in just ten years. Not to mention, industry developed, such as Urbana’s famous Hodgson Steel Corporation. The population reached a climax at 2,000,000 in 1960, and has stayed that way ever since. Urbana serves as the largest city in the state of East Valmont, and has a massive university (University of Urbana) to downtown’s extreme northeast. The city’s populace are always proud of their Federal Freeway System; the FF85 is the north-south motorway, the FF43 is the diagonal north-to-south motorway (that connects the city to the state’s capital, Fenland), the FF40 passes through the west side of the city, and merges for about 3 miles (4.82 km) with FF85 until it splits off again. The Western Viaduct (EV 303) is the main freeway that borders the Valmont River, and serves as the state’s only scenic motorway route. Finally, the FF443 comes from the suburb Venland across the river to its terminus with FF43. The city of Urbana constantly invests in preserving the past and constant innovation, and certainly serves as a gem in the U.S.Y. 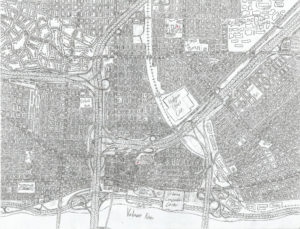 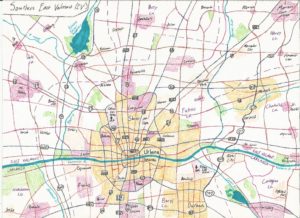