In my maps I love to combine elements of existing cities in an imaginary but realistic setting. This time I took inspiration from Hamburg – a busy port situated far inland, safe from the battered sea shores. Plus a taste of Copenhagen and the Dutch city of Dordrecht. This does not mean that I have a plan in mind: I start drawing a centre with the basics of city-river-port in mind, but without any ideas about what will follow next. I don’t know how many railways will come, how the river turns, where the newest neighbourhoods are going to be. After the centre, the ‘layers’ of neighbourhoods appear. Here I often use the Dutch model, as I’m familiar with it and it is visually (on a map at least) more appealing. It starts with 1870s ‘Revolution construction’ outside the walls, continuing with early-1900 planned expansions, 1930 Garden Cities, 1950 post-war Reconstruction flats, 1960 modernist giant flat walhallas, 1980 ‘Colliflower neighbourhoods’ (with many curvy, dead-ending streets and greenery), 1990 goneometric large-scale VINEX quarters, 2000 water neighbourhoods, and currently many infill developments on former industrial sites.

The city was established on the place where a small stream merged into the Elbe-ish river. The stream has been rerouted (S-SE) later to the modern, straight-lined canal (N-SE). The city has a 17th century expansion on the north bank, where also the main railway station is. To the east of the old centre is a Speicherstadt (à la Hamburg), and modern docks increase in size with one moving downstream. The map includes several villages that have been encapsulated in the modern suburbs (in NW and E). There are Garden Cities (north bank, NE), 1960s modernism (W, S), a university campus (S), VINEX (N), colliflowers (NW) and a water quarter (W). The ‘citadel’ in the SW is a fashionable, fake historic quarter. The city is crossed by a number of railways, but for cars, it’s a huge bottleneck – there are few north-south crossings; one of which running right through the centre, the way they liked it in the 1960s.

The name Zuverdam was derived from Zuve (the fictional name of the little stream) and -dam, a common suffix in Dutch, like Amsterdam and countless similar cities. The map was drawn by hand and measures about 35×45 cm. 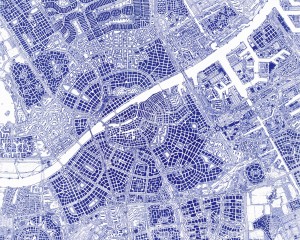