“I have been drawing maps for as long as I can remember. Street maps have always been my favorite and until recently I didn’t think anyone else drew street maps of fictional cities. I used to think that others saw drawing maps of fictional cities weird so I mostly kept the drawings to myself. My maps are mostly influenced by the Hagstrom Maps and Atlases of New York City, Nassau and Suffolk counties of Long Island, NY that I first collected as a kid and still collect today. Hagstrom maps originally had a hand drawn look to them in the last decade they went digital. I am recently retired from the New York Army National Guard where I was a Geospatial engineer which 20 years ago was called cartographer in the army. I still try to draw maps today but finding time to do them is a little harder to come by. I am currently scanning all my old maps on a 11×17 scanner and then joining them together.

This is a map for the fictional city of Reedsburg. I drew this map in 1993 and the design is based off the Hagstrom street atlases sold in the New York area. Reedsburg is the largest city in the state of New Oswego in the country of Ammadore. Majority of my maps are located in various states in Ammadore.” 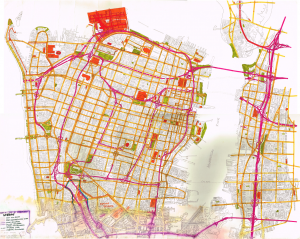