Kasenberg (or Kaserhyl in the local language) is in the southeast tip of Fundlen. It is the capital of the region of Kasenlun (or Kaserlin), a formerly independent trading state that was into the neighbouring nation of Ceaya in the 1870s. After the Great War of the early 1940s, Fundlen occupied and incorporated Kasenlun. The status of Kasenlun has soured relations between the two nations ever since.

Kasenberg is a historic port on the Itallenn Sea, with links to civilisations around its perimeter. Similar to cities like Trieste and Gdansk, it has a cosmopolitan atmosphere, complex history and varied urban environment. It remains a substantial port and naval base (to the east, off this map).

The old city is sandwiched between two escarpments, separated by a natural harbour. To the east, the old marshes of the Slager estuary were drained in the 19th century to build a modern, grid-like city, around the main Rejpublikallee and the Slager quays.

During the 1950s-1980s, the city saw occasional unrest and was ignored or repressed by central government, with the local language banned from schools and official use. Since the early 1990s, with the discovery of oil in the nearby sea, the city has undergone an economic and cultural revival, recovering some of its past glory. It has become an exciting destination once again. The growing regional identities in Fundlen have been accepted and encouraged by modern governments.

Transport is provided by trams and bus routes. The 1970s western escarpment tunnel brings traffic in from the main A6 motorway to the rest of Fundlen. There are commuter railway services in the morning and evening to Stadhof and Ulsthof, and irregular services throughout the day on the line connecting the two. The city has had poor external transport connections for many decades, with the A6 motorway incomplete (the final section is estimated to open in 2019), and a slow railway line to the capital. 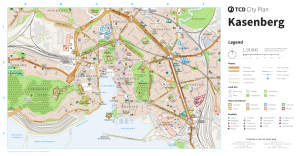