Mirages of the past – Appreciating Bangalore Through Speculative Histories

This project was elaborated as diploma thesis by Surasti Kaur Puri at Srishti School of Art, Design and Technology (Bangalore, India) in 2013.

“Creating ‘What if’ scenarios of possible trajectories Bangalore history could have taken and creating a fictional world and a guide to that world.” (p. 10, Documentation Book of the project)

See the inspiring result of Surasti’s work below: Three different map’s of Bangalore, two of them with an alternate history, each with an attached PDF document containing a description. Have a look into the overall documentation of “Mirages of the past” as well. You’ll find some texts taken from this document below. Also, see Surasti’s Behance page for more details about the project. 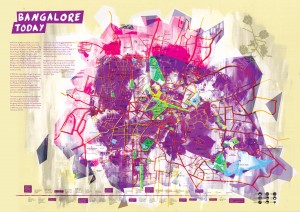 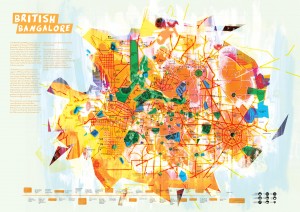 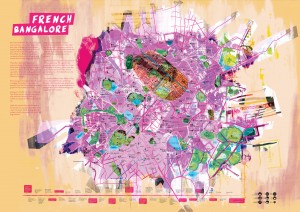 “The Design Brief
Every place has a past, each city a history and each one of us has born and grown up in the context of the environment we live in. With this understanding, histories of cities seem overlooked. When I travel I tend to bring back a map of whichever city I happened to visit, and after that point, after returning, that map becomes a souvenir, a tangible piece that excites my memory. A map is something that fulfills not only function but creates a desire to discover and explore. It also is a tangible form of a city, which extends beyond regular social hierarchy, much like a phone directory, its a singular source of information that requires you to return to it time and again and caters to an audience not limited by access to technology.

Cartography is the study and practice of making maps, combining research, technique and aesthetics, it builds a representation of a city or place to communicate information spatially. By connecting history with a cities spatial development, It allows one to get a basic understanding of that areas historical importance, transition and development over hundreds of years. A map might show you a city you know nothing about, and you wander through the city, ignoring street names and house numbers, its the experience. The purpose of the map becomes limited by its function as well, it can be used when you need and know where to go, when you need the information it might have, but how can the map be more than its labels and directions?

A city like Bangalore, a growing metropolis, whose popularity has spread on the basis of its unique new culture and IT boom. It has been forgotten for its gardens and lakes. Its history has been limited to the twentieth century and late nineteenth century, beyond which it has been deemed irrelevant. But Bangalore once was geographically important for dynasties and empires, for the ancient Indians and the colonial British. What if there were different outcomes for each war, each dynasty? How can one revisit the past, by a mere image, and a series of words, how can a map bring out a fantastical experience, and tell a story about cities that were,
and people that lived? I have always been intrigued by histories of cities and how they shape different trajectories of its growth, and it feels almost immoral for that to be not only disguised by development, but to be forgotten entirely. History is what shapes us and has for generations. Information might be available, but is seldom accessible. A map gives the graphics and the words but to combine the two is what makes the viewer connect with that piece of paper.” (ibid., p. 11-12)

Learn more about the project at Surasti’s Behance page.